Over the last year SKY News have been working with PAT to install a brand new LAWO mc56 MKIII in their studios. Keith Cooper, Sky News’ Audio systems architect, gave some insight into this project via Content & Technology magazine earlier this month.

We have included a excerpt from this article below.

“According to Audio Systems Architect Keith Cooper, what was initially a plan to replace a single, ageing Euphonix console became a network-wide overhaul bringing with it greater workflow and cost efficiencies. “When [ANC] bought the Euphonix, they had the same amount of budget again to buy another console and replace one console. I said, ‘I see what you’re trying to do. You’re trying to fix a problem, but you’re only looking at one control room you’re doing this with. Why don’t you standardise the whole lot and I bet for the amount of budget that you’ve got I could probably design a system that would actually sort out all the control rooms and the Macquarie Park facilities. And improve the audio overall rather than just one room’. That’s when I got my thinking cap on.” Under that thinking cap, Cooper envisioned a solution including Shure microphones, Cedar Noise Reduction, Lawo mixing and routing solutions, and DirectOut’s Prodigy MP I/O – all under the coordination of Lawo’s VSM control system.

C+T: Can you just talk me through the setup I guess, the architecture of the studios?

“The place has been traditionally a control room tied to a studio. They wanted a lot more flexibility and in doing so they needed a solution that gave them flexibility in the routing and so forth. They’ve got four control rooms, in Macquarie Park they’ve got four studios, and then they’ve also got multiple bureaus around the country. In Sydney there’s one at CBD. They’ve got Holt Street, which is a NewsCorp building where they’ve got a big studio and a small studio. Dotted all the way around the country are these smaller bureaus which are three-camera studios where they’d either host from, or interview from, or put guests in, and so forth. The architecture is that we’ve got a Riedel’s MicroNs video backbone system. And we’re taking the audio and we’re using that as our de-embedder and embedder for the whole audio structure. “Then it’s MADI from there to our Lawo Nova Core which has a surface attached to it. Everything’s presented to that Lawo which acts as the house audio router and DSP farm. And then that Lawo sends the signals required to the control rooms to Lawo MC2 Micro Cores, which have no surface. There’s only a GUI interface. And then Mosart, the automation system in Sky, controls those Micro Cores for the sound that goes to air for the control room. That Micro Core presents back to the main Lawo and then that sends off to be re-embedded back into the video stream at that point. “The main Lawo also provides all the monitoring for the control rooms, the inserts for all the Cedar de-noising algorithms. It’s connected to, we have three connections from the main Lawo. We use the Ravenna protocol for connecting to control rooms. We use the Dante protocol for connecting to our comms systems and radio mic systems. And we use MADI connecting to our Micro Cores and our Prodigy stage boxes. There’s three different networks being used in the place to deliver all these signals.”

What led you to pick those particular technologies?

“I’ve played with every brand of console over the years. The Lawo has one of the most flexible routing systems and DSP shuffling systems I’ve seen. Also, the fact that there’s no audio director in this facility driving and monitoring the sound. It falls under the role of the TDs. And the TDs are busy routing signals to control rooms, lining up cameras, lining up Skype calls, setting up two-way communications, so they needed a simple interface to be able to control sound. Where you’d be able to mute a microphone, to be able to increase or decrease its level, and actually see that there’s a signal there, and a signal able to go to air. “To control all this mechanism we’d put VSM in as the control source, which means that what they used to have to do was to run out of their suite, run into the audio suite, change mix-minuses, increase a level or decrease a level based on things, run back to their room and do what they needed to do. Now this has given them the workflow that they have a touch screen and they’re accessing the components of these audio consoles that they need to access, rather than having to be an audio engineer and understand how an audio console works. “What we’ve built is an audio facility that has a mastering style to it, so I can process and master the incoming and outgoing feeds of the studio. And the day-to-day control’s being controlled by the actual pilot and co-pilot in the control room, and the TD at the end of the day. “I sat down and designed the whole system as a solution. And I wasn’t brand driven by it. I was looking for the right components that give the station the flexibility they require. Because they have a central house at Macquarie Park but they have decentralised studios we wanted to improve the front-end sound and have that controlled before it got to any audio mixer. I looked for a box that could operate independently as the pre-amp, as a mixer with DSP for compression and auto mixing level control, and I came across the Prodigy MP made by DirectOut. That is the front end which is going to be installed around the country over the next two years. We decided we’d make that the start of it here in Macquarie Park. We went with Lawo consoles as our DSP farm and routing platform. Then we needed something that was really robust as a lapel microphone for Sky. Shure had delivered a new product called TwinPlex which is a far more robust build of a microphone, and it has a very nice warmth to it. On top of that, they also had a RF solution for us that was quite unique. They have a spectrum monitoring box that, when you set up, will scan the band for you that you’re operating in. It’ll pick out all the frequencies that are available in that band. It then gives you the ability to deploy frequencies to your receivers and your transmitters. Then it keeps a pool of frequencies available and it sits there monitoring the RF spectrum that you’re working in. And if any one of your frequencies get a hit from somebody else, it would auto switch and retune the transmitter and receiver with only a millisecond of loss of audio. “Because Sky has no one managing their RF infrastructure, and they want the use of lapel microphones on radio packs to be able to walk and talk on their sets, I needed to find a solution that met that requirement. Each piece of the puzzle has been picked because of the process that can provide, and the flexibility, and also are well established in the market in their areas. Shure’s become the front end. Prodigy DirectOut has become the pre-amp and swiss army knife of each studio space. Lawo’s become the backbone routing and deployment mechanism. And then CEDAR’s become the no noise algorithm in the process. “And Riedel’s MicroNs have become the de-embedder, embedder and Multiview facilities for the TDs and audio, and some of the control room elements. The combination of all that equipment is how we’ve got there.”

To learn more about the Sky News project you can read the full article in the November/December edition of Content & Technology. 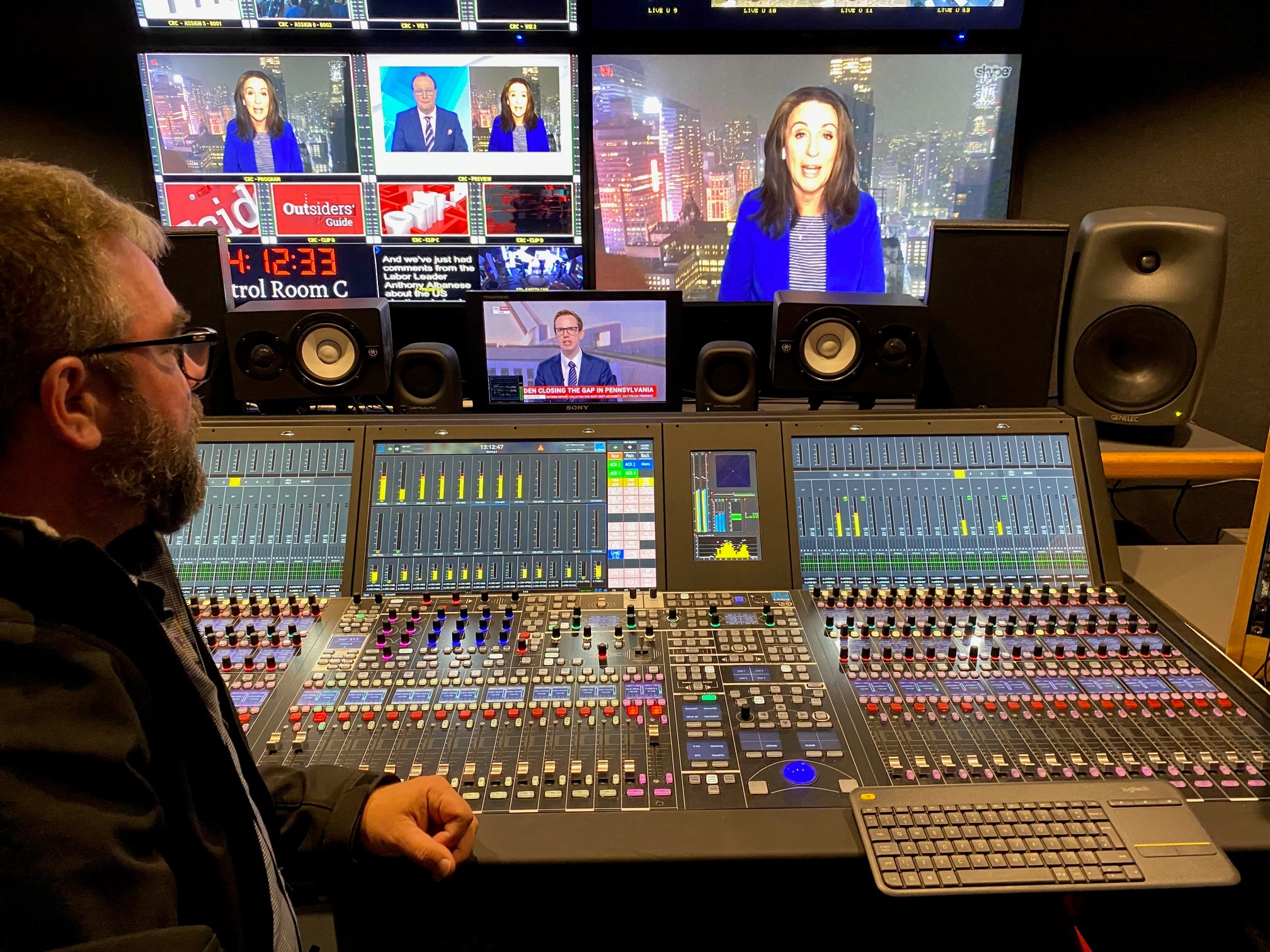 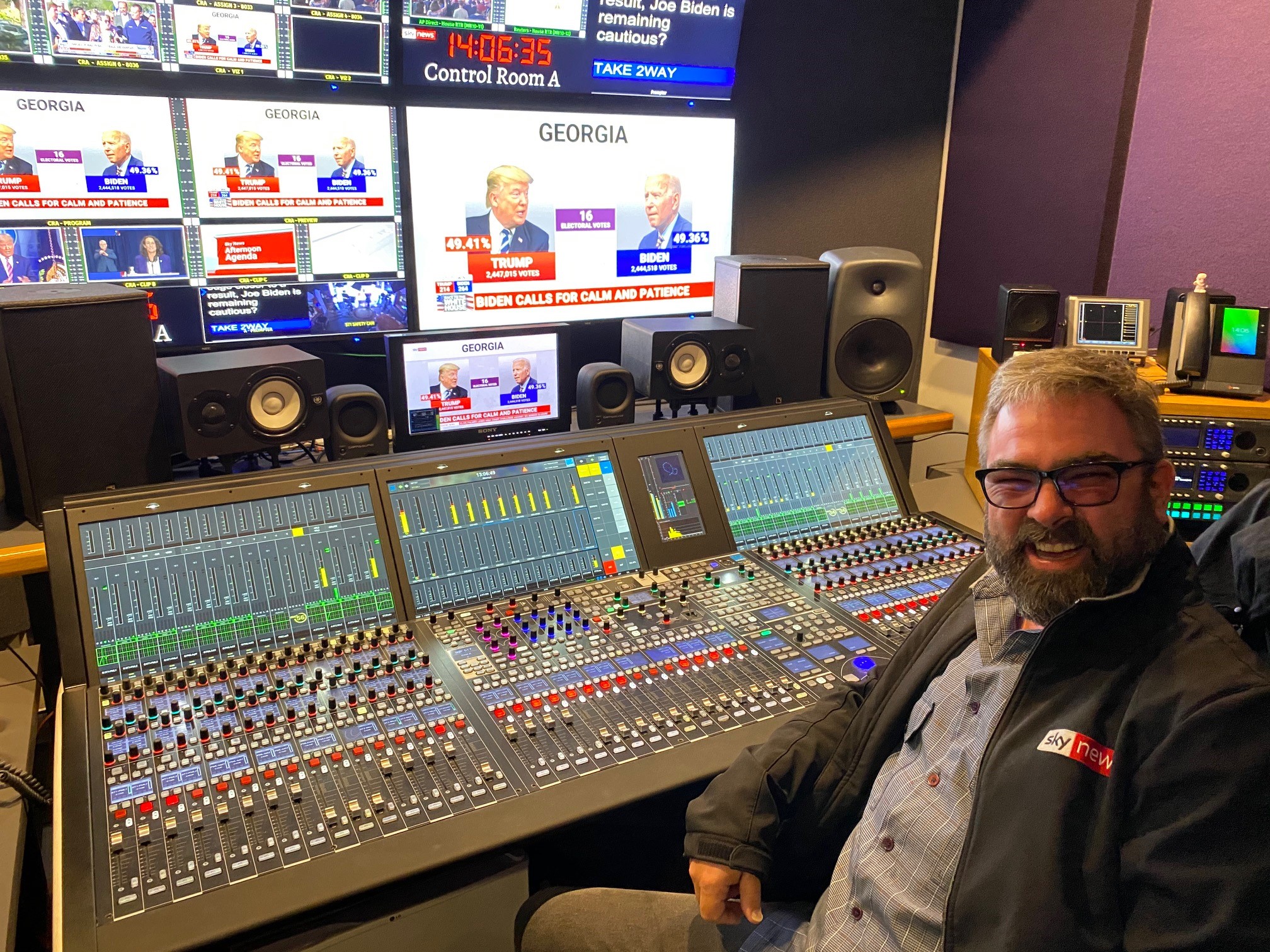 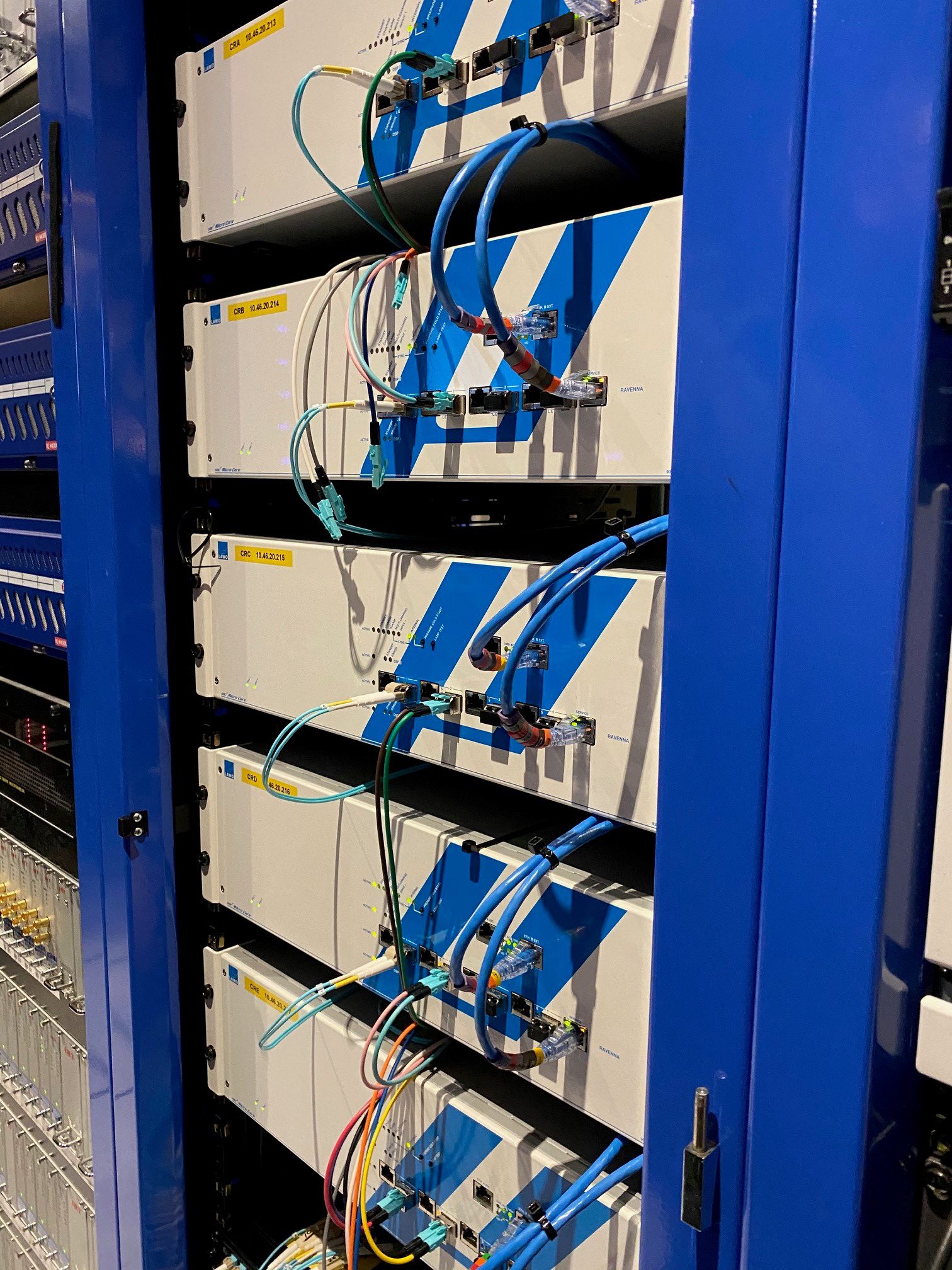 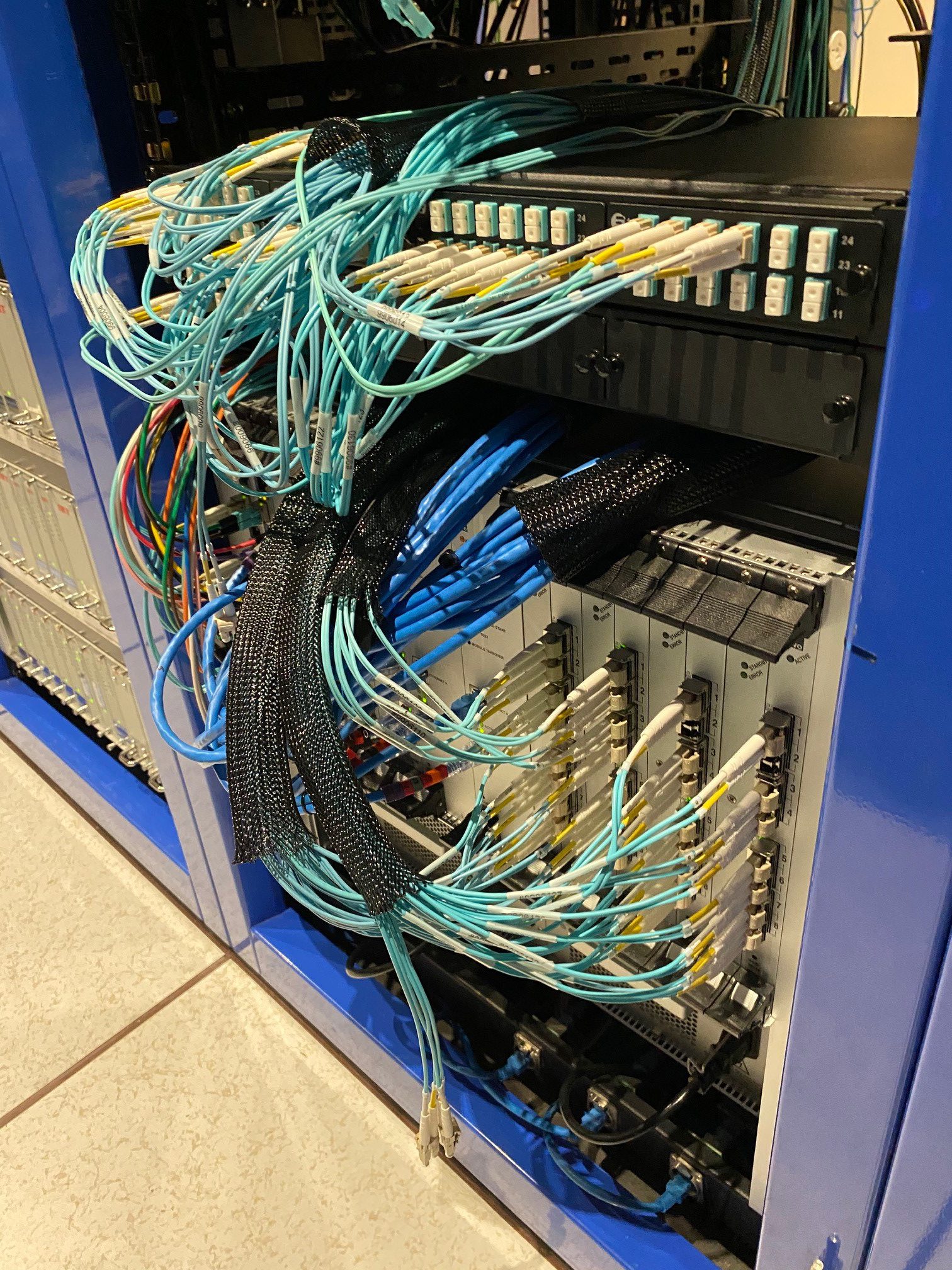